Are bleeding gums a problem?

What are the causes of bleeding gums?

The most common cause of bleeding gums is gingivitis, this is the first stage of gum disease  and is really simple to treat if caught early. The acid excreting bacteria which live in your mouth congregate where your cleaning is not quite so efficient, usually in between the teeth. As the bacteria congregate because plaque and this plaque  can irritate and infect the gums. When the gums become irritated they become swollen, tender, red and can bleed whilst brushing. Gingivitis responds well  to a change in cleaning habits and a good visit to the hygienist or dentist.

Sometimes medications can have the side-effect of bleeding gums, these include:

If you are used to using a floss or interdental brush in between your teeth and forget for a few days then you might find that your gums bleed slightly when you reintroduce this interdental cleaning. This shows how quickly the gums can become inflamed if cleaning is not consistent. If you change your technique, for example switching from flossing to interdental brushing then you may also find that the gums are slightly sensitive at the beginning.  You will normally find that the gums settle down after about a week of changing your routine.

We’ve use the word ‘implements’ here deliberately. All manner of household items  such as credit cards and safety pins get used to clean between your teeth. We highly recommend you don’t do this, primarily because of the risk of cross infection… Who knows where those credit cards or safety pins have been!

Smokers are at a much higher risk of gum disease than in non-smokers as the toxins in the cigarettes inhibit your body’s ability to fight disease and infection in your mouth.

During pregnancy some women find that their gums swell and have more of a tendency to bleed, this is due to hormonal changes which alter the body’s response to the bacteria that cause gum disease. So long as a healthy oral hygiene routine is maintained during the pregnancy the gums should return to their prepregnancy state afterwards.

What to do if your gums bleed

The answers to this really lie in addressing the causes which we have described above. Principally this involves:

Can you catch gum disease?

The quick answer to this is yes. For example, a kiss can exchange up to 80,000,000 bacteria, some good and some harmful. If your own immune system is suppressed for any reason then the concentration of bad bacteria may just tip the balance over the edge in your mouth, leading to gum disease.

It’s important to note however that gum disease is not infectious, in the same way  as many other diseases are. it’s much more complex than that.

The same is true for sharing drinks or utensils such as straws or  forks. Always maintain a healthy cleaning routine to ensure that the bad bacteria  stays well away from your mouth!

Whilst this is rare in the United Kingdom, vitamin C deficiency, otherwise known as scurvy can cause gums to bleed.

My gums bleed when I’m at the dentist, why is this? 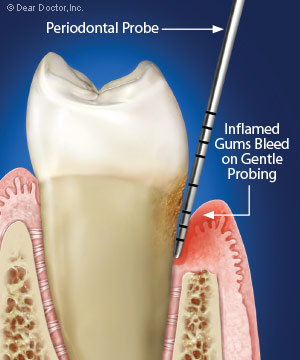 When you visit your dentist they will usually probe around all surfaces of the tooth. This is to check the space between your gum and tooth, they will be looking for the depth that the probe can go and scoring this. If this is monitored between dental appointments  then the score can be monitored to see whether it goes up or down, this is then a good indicator as to  whether your oral health is improving or getting worse.

A graduate of the Newcastle-upon-Tyne Dental school, Dr Padayachy has been a dentist at the award winning Senova Dental Studios in Watford since 1998 focusing on comprehensive restorative and cosmetic dentistry.

Jay has previously been the president of The London Dental Fellowship.

He has been a member of the British Academy of Cosmetic Dentistry since its inception and serves on the Credentialing committee. Jay has lectured widely on all aspects of cosmetic dentistry, dental photography and comprehensive care.